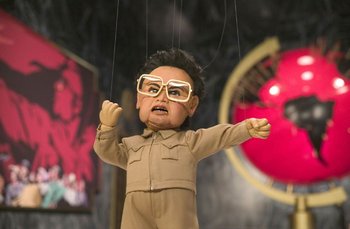 Supermarionation is a technique developed in the 1960s where marionette heads had Solenoid motors that moved the lower lip to give the impression of speaking. The technique was first used in the 1960s British series Four Feather Falls, produced by Gerry Anderson. A western with fantasy elements, FFF was soon followed by the sci-fi action series Supercar, which was syndicated around the world. Anderson wasn't the only producer who utilized articulated marionettes, but his Supermarionation shows were the most popular, including Thunderbirds and Captain Scarlet and the Mysterons. As the technique simply cannot portray walking convincingly, most of the action is futuristic-vehicles-oriented to compensate. In fact, Anderson's company proved so skilled in model shots of vehicles that it could easily create spectacular scenes in a day that other companies tried for weeks to create before delegating to these experts.

From Stingray onwards, these were produced in colour despite this not being really available in the UK at the time — this was to make things easier for foreign sale.

After 1969, Supermarionation disappeared, but not completely. There were many imitators, each one with different kinds of puppetry, many not even using marionettes, including Gerry himself.

The semi-realistic worlds presented in Supermarionation often have a lot of buildings, vehicles and other Stuff Blowing Up in the form of models. This is as good a reason to watch it as any.

The word "Supermarionation" is a portmanteau of "marionette" and "animation", with the amplifying prefix "super", and has nothing to do with Super Mario World, which it predates by several decades.

Supermarionation was seen in these TV shows:

As well as these films: