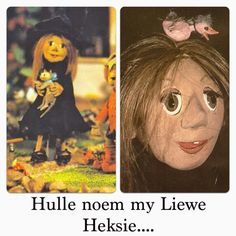 They call me The Dear little Witch (her name's actually Livinia)
Advertisement:

Die Liewe Heksie (Afrikaans for "Beloved Little Witch") was an Afrikaans work of fiction created by children's book author Verna Vels in 1961. It centres on Liewe Heksie, a rather incompetent and forgetful witch, who lives with her friends the elves in Bloemmieland ("Land of Flowers"), and whose general well-meaning ineptitude and lack of magic skills led to many funny situations. The Liewe Heksie series started off as radio stories, followed by books and stories on vinyl record. Liewe Heksie made a television debut in 1978 as an Afrikaans-language children's television programme which became a well-loved fixture of South African TV. A second series of Liewe Heksie followed in 1981, for a total of 52 television programs. The quality of the puppets, animation and sets vastly improves in the second series. The first series is available on You Tube, provided officially by the South African Broadcasting Corporation.

. Not all the second series episodes are available on YouTube but a surprising number have been unofficially uploaded by fans.