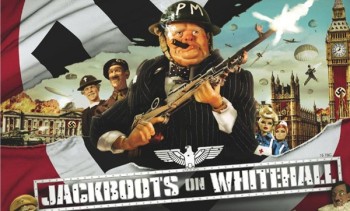 June 1940 — England's darkest hour. The entire British army has surrendered at Dunkirk. A demoralised Winston Churchill is planning to retire in a few days. Chris the farm labourer can't join the army because his hands are too big to fit inside a trigger guard, and The Vicar is keeping his beautiful daughter Daisy at arms length. Meanwhile Those Wacky Nazis have an Evil Plan — dig a tunnel under the English Channel to London, capture Churchill and end the war in one stroke! Mustering what little forces he has, Churchill orders a retreat to Scot Land — a wild and uncivilised country populated by savage warriors with huge hands, lead by the legendary Braveheart. As Churchill's Ragtag Band of Misfits Hold the Line at Hadrian's Wall, Chris must go on a lone quest to seek out England's last hope, and the reason for his massive mitts.

Unfortunately any story this epic has to be scaled down, say to about 1/6 size. That's right — this is the UK's answer to Team America: World Police. Your Mileage May Vary over whether it matches that movie for laughs, but it has its moments particularly if you're a fan of British World War II movies. Or if you're Scottish.

Jackboots on Whitehall provides examples of: