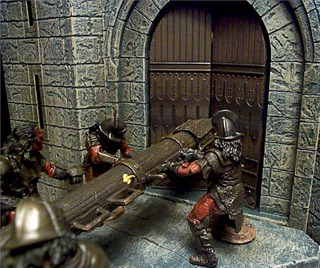 "Knock knock!"
Great engines crawled across the field; and in the midst was a huge ram, great as a forest-tree a hundred feet in length, swinging on mighty chains. Long had it been forging in the dark smithies of Mordor, and its hideous head, founded of black steel, was shaped in the likeness of a ravening wolf; on it spells of ruin lay. Grond they named it, in memory of the Hammer of the Underworld of old. Great beasts drew it, orcs surrounded it, and behind walked mountain-trolls to wield it...
— The Return Of The King
Advertisement:

When you want to enter a structure, you politely knock on the door. When the door does not open after that, you knock harder.

A common element in sieges is the use of a large blunt object to batter down the fortification's gate. The type of object varies depending on the attacker, from tree trunks barely cleared of branches to metal-capped beams carried and swung on a wheeled carriage. Some can even be fully covered by a protective shield to ward off arrows and oil. Just watch out if the gate opens just as you're about to hit.

This is very common in fiction. After all, it's dramatic, looks cool, and has plenty of basis in Real Life. The Theory of Narrative Causality, however, means that it's only effective half the time. If they are successful, it's Breaching the Wall.

Even in modern times this trope and breaching tool is still rather prevalent, especially if it involves SWAT teams and other law-enforcement. Although it can also be seen in the hands of military and the like. Usually just to breach doors although rarely there are times when they are used as weapons in of themselves.

Sometimes, a person has to be substituted as the battering ram, mostly through his head. Other times, a large, powerful animal or monster may be used in this capacity instead.

If you use a vehicle as the ram, then you have found that Ramming Always Works. If the vehicle is an automobile, then you have mastered the art of Car Fu. See also Anti-Structure.

The battering ram weighs down the bike and makes it topple.

The battering ram weighs down the bike and makes it topple.