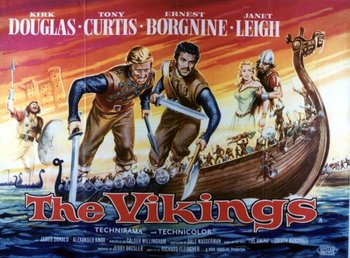 From the fury of the Northmen O Lord, protect us!
Advertisement:

The Vikings is a 1958 historical drama/adventure film directed by Richard Fleischer, filmed in Technicolor, produced by and starring Kirk Douglas, and based on the novel The Viking by Edison Marshall, itself loosely inspired by the legendary sagas of Ragnar Lodbrok and His Sons set during The Viking Age. The narrator at the beginning of the film is none other than Orson Welles.

In the 9th Century, a Viking raid on Northern England sees the King of Northumbria slain and his wife Enid brutally raped by the Viking chief Ragnar (Ernest Borgnine). As Enid's cousin Aella (Frank Thring) usurps the throne for himself, she discovers that she is pregnant with the true heir and arranges for him to be smuggled away to protect him from Aella.

Years later, Lord Egbert (James Donald), an English Lord who has betrayed Aella to the Vikings, is locked up by the Northumbrian King, but escapes and is brought up to the lands of the Vikings. There he meets Ragnar's ruthless son Einar (Kirk Douglas), and a slave with a mysterious past named Eric (Tony Curtis). The Englishman conspires with Ragnar to kidnap the Welsh Princess Morgana (Janet Leigh), who is pledged to Aella, and she is brought to Long Sound, Ragnar's domain on the Skagerrak, by Einar, who quickly desires her for himself, but has some serious competition from Eric.

Not to be confused with the Vikings TV series, which also borrows a lot from the Ragnar Lodbrok and His Sons sagas but is a more recent and tonally different epic set in the Viking times.