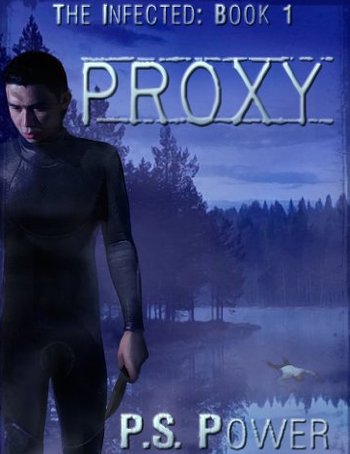 Not your average superhero.
Advertisement:

The Infected is a nine-book series (plus trilogy spinoff the Infected: Ripped to Shreds) of superhero books by author PS Powers.

Brian Yi is a fat MIT dropout who stacks toilet paper in a plant job to keep up rent, groceries and video game money, but he has a secret. He is one of the Infected, a superhuman, with the power to take the place of people who are about to die. This gets out after he loses a fight to a superpowered serial killer called the Jackal, leading to Brian's brutal arrest, torture and near-murder by a police department not remotely equipped to handle superpowers.

He is then taken to a hospital, and finally to the base of the Infected Protection Bureau (IPB) the secretive federal agency that deals with Infected crime. The experts give him a life expectancy of months before he is dropped into a situation he simply cannot escape, but think if he does nothing but work out and train for months, he can save dozens of lives, and maybe, just maybe, he can prevent outright war between the Infected and Normals.

In this world, the mysterious Infection (it's not contagious OR biological, just a name from when they tried to study and contain it like it was) grants people superpowers, and has since the late seventies. However, 90% of powers are not combat-useful, and every Infected has a "first mode" a particular emotion or mindset that is dialed Up to Eleven and becomes their default state. Very few things are healthy turned up to that degree— even kindness and compassion make you a doormat. In effect, each Infected is a superhuman with an untreatable mental illness, which makes it easy to hate and fear them.

They apparently had a brief superhero phase (which ended when Congress authorized police and military to shoot anyone wearing a mask on sight) and were Super Soldiers throughout the Cold War. Today, there are no superheroes, merely field operatives of the IPB. But it could be worse; the Russians and Chinese apparently shoot their Infected out of hand, and welcoming liberal France has apparently became an anarchic wasteland of feuding superhuman warlords. Still, the concept of Infected concentration camps has many strong backers in Congress, and there's a powerful team of ex-Special Forces Infected eager to begin the war....

The first, middle and last books are told from the POV of Brian (who is given the codename Proxy) and it is very much his story. The remaining six books have the POV of the title character, but tend to feature previous POV characters prominently.

The Infected contains examples of: