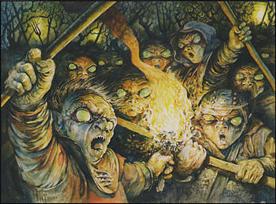 The standard equipment for any angry mob on a Witch Hunt. The mob may be going after a witch, an evil wizard, a vampire, a Mad Scientist, a perverted person, or any other unpopular local figure. If the mob is after the villain, he most probably ends up being shamed by the mob. If they're coming after the good guys for one reason or another (like if our heroes are hiding a Reluctant Monster), their best defense is Shaming the Mob or an obstacle that will force them to go one by one, raising the question of, "Who Will Bell the Cat?"

On occasion, however, they feature as the just outbreak of the people against an evil, but legally untouchable, character.

Related to the less focused, but more destructive, Powder Keg Crowd. Malicious Slander may have stirred them up; good luck finding out who, if anyone, is responsible for the rumors (though there may be a Rabble Rouser involved).

Truth in Television, of course; in prior centuries where the vast majority of the people were living in the countryside and couldn't necessarily afford more expensive weapons such as guns and swords, pitchforks (along with scythes and sickles) were inexpensive and quite versatile, and so it became a popular weapon to use in times of rebellion.

Featured and parodied so many times, it's a definite Undead Horse Trope. A common parody is to ask the mob where they got their equipment on such short notice (often revealing it as something ridiculous), or for angry mobs to be judged by the quality of such equipment.

See also Kill It with Fire and Burn the Witch! for its inspiration. A Flame War happens when you take the sentiment behind this and apply it on the Internet. When you've got pitchforks but not torches, see Devil's Pitchfork, Prongs of Poseidon or Gardening-Variety Weapon. If torches and pitchforks are featured in a musical, then an Angry Mob Song is pretty much guaranteed.

Married with Childern - Ep 101 [You Better Shop Around Pt 1]: A heatwave hits Chicago, and Al's family pester him to get an air conditior. He cheaps out with an old World War II model but it causes a blackout across the neighborhood, and some very angry neighbors.

Married with Childern - Ep 101 [You Better Shop Around Pt 1]: A heatwave hits Chicago, and Al's family pester him to get an air conditior. He cheaps out with an old World War II model but it causes a blackout across the neighborhood, and some very angry neighbors.