Film / Within Our Gates 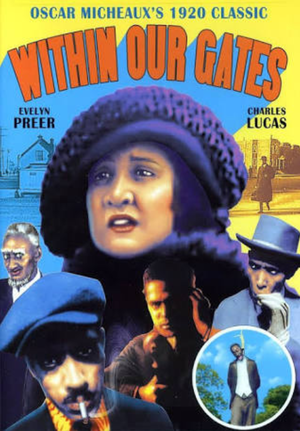 At the opening of our drama, we find our characters in the North, where the prejudices and hatreds of the South do not exist - though this does not prevent the occasional lynching of a Negro.
—Opening title card
Advertisement:

Within Our Gates is a 1920 film written, produced, and directed by Oscar Micheaux.

It is one of the earliest surviving examples of the "race film", namely, a film with an all- or nearly all-black cast, aimed at black audiences, and in this case, made by a black writer/director. The story centers around Sylvia Landry, who, at the start of the film, has traveled to the North to visit her cousin Alma. Sylvia is awaiting the arrival of her boyfriend Conrad, who is coming home to marry her. However, Alma also loves Conrad, and contrives for him to catch Sylvia in a "compromising position" with a white man. Conrad dumps Sylvia and storms out. Sylvia rejects the advances of Alma's brother-in-law Larry, a gambler and criminal, and instead goes back south to work for the Piney Woods School, a school dedicated to teaching young black children. The school is running out of money, so Sylvia goes back north to raise funds, meeting both Mrs. Warwick, a wealthy white philanthropist, and Dr. Vivian, a young black man who takes an interest in Sylvia. Sylvia won't marry him, though, so Dr. Vivian asks Alma about her, and hears a harrowing tale of Sylvia's past.

Within Our Gates is commonly believed to have been made in response to D. W. Griffith's The Birth of a Nation, which was both wildly popular and appallingly racist. Oscar Micheaux became the most important director in early African-American cinema, making several dozen films over a career that lasted thirty years. Many of his films are lost, and Within Our Gates was considered lost until a single print was found in Spain in The '70s. All but four of the intertitles were lost due to being replaced by Spanish titles, requiring the Spanish title cards to be translated back into English.

Compare The Scar of Shame, another silent "race film", made seven years later and The Symbol of the Unconquered, a similar Oscar Micheaux film released later in 1920.

Within Our Gates contains examples of: