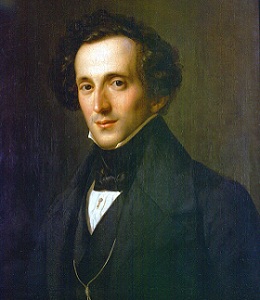 He wrote one of the two most famous pieces of wedding music ever, originally as incidental music for a production of A Midsummer Night's Dream. Other well-known works include the Christmas carol "Hark! The Herald Angels Sing," "War March of the Priests," the concert overture The Hebrides (also known as Fingal's Cave), "Spring Song," and the Violin Concerto in E minor.

Outside of being a famous Romantic Era composer, Mendelssohn is also credited with kickstarting the Bach Revival, leading to the modern-day veneration and renown of J.S. Bach as a composer and music theorist.

Notable Works which cite Mendelssohn or his works: