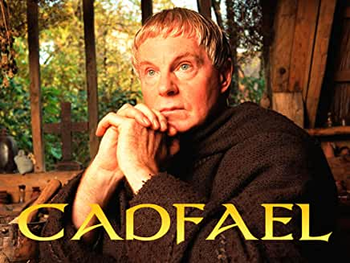 A 13-episode British series, based on the Brother Cadfael murder mystery novels of Ellis Peters, which aired from 1994 to 1998. It's rather unorthodox in its choice of setting: 12th-century Shrewsbury, in Shropshire near the Welsh border — a time of civil war, disease and strife, where Death is a frequent visitor. Many are those who would take advantage of this fact to conceal a murder. After all, who would notice one suspicious corpse amongst so many?
Advertisement:

Cadfael (Derek Jacobi) is a middle aged monk who took up the cowl after abandoning the violent, passionate life of a soldier. It was in The Crusades that he learned how to fight with a sword, which he often wears under his robes during dangerous missions. Yes, he may have sworn off violence, but he knows enough about the world to know that his vocation alone will not protect him from dangerous men. Cadfael's keen senses, ability to communicate with people, and Encyclopaedic Knowledge of herbs and plants make him the perfect forensic expert — a fact which has not gone unnoticed by the local sheriff, Hugh Beringar, who often sends for Brother Cadfael whenever a mysterious corpse turns up in the town.

Sometimes Cadfael will just stumble onto a mystery by himself, but either way, once he gets put onto the scent, there's little anyone can do to shake him off. Derek Jacobi gives an excellent portrayal of the competent and compassionate monk in what is probably his best role since I, Claudius. Fans of history and/or mystery would do well to check this series out.

Sean Pertwee played Hugh Beringer in the first four episodes only, and was later succeeded in the role by Eoin McCarthy and Anthony Green. Future stars who appeared in this series include Toby Jones, Tara Fitzgerald, Stephen Moyer, Anna Friel, Jonny Lee Miller, and Natasha McElhone. Julian Glover also pops up in one episode.