Not Distracted by the Sexy 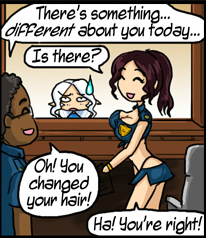 This is the inversion of Distracted by the Sexy.

Stripperiffic outfits are often accepted as normal attire by other characters. A character, almost certainly female, spends the whole story wearing an incredibly revealing, overtly sexy uniform (or collection of outfits) without her attire (or lack thereof) ever altering any situation — or even being acknowledged. Her signature outfit might consist only of a meter of plastic tubing and spike-heeled boots, but nobody bats an eye. She stands around and discusses the team's plans to invade the enemy compound, or rescues ordinary citizens on the street, or pilots the Cool Ship, always dressed that way, and nobody else finds it even a little odd or remarkable. Nobody ever stares at her or says, "Day-um, girl!"

It could be said that nearly all superheroines operate under this trope. The figure-hugging gear which is de rigueur for such heroes is rarely addressed, unless the author is specifically lampshading this trope.

You need a generous helping of this trope to learn anything from a Sexy Mentor, or to be friends with an Innocent Fanservice Girl (let alone a Shameless Fanservice Girl).

One could Hand Wave this as being the cultural norm in outer space or on whatever world she's inhabiting. In a real-world setting, especially in live-action films, this is often intended to suggest how sophisticated, jaded, or fashionable (or homosexual/heterosexual, depending on the relative genders) the people in question are. The character may already be in a Seduction-Proof Marriage, or might have Single-Target Sexuality towards someone else.