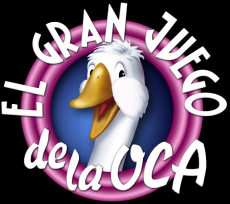 El gran juego de la oca (The Great Game of the Goose) was a mid-1990s Game Show from Spain that preceded the Fear Factor-type game/reality program by five or ten years (and wonderfully lacked many of the now-overused Reality TV Tropes). One of the country's most popular offerings at the time, it was rebroadcast in Spanish-speaking countries around the world as well as the United States.

Four contestants played a giant board game based on the actual children's "Game of the Goose" (basically a linear "Chutes and Ladders"), but anything that might have been oriented toward children ended there. One at a time, players rolled the electronic dice, earned money for each space they walked, and finally wagered some of their money on a prueba (mission or challenge) they would then be required to perform. Completing a challenge won the wager, while a failed mission deducted it. As in the board game, there were also some shortcuts scattered throughout the board, especially the titular Oca spaces. Also included were a few "punishment" spaces that affected any contestant that landed on them, just to make things interesting; the most notable were the ones that required the player to receive Body Paint or a Traumatic Haircut.

The player to successfully make it to space 63 by exact count won any money he or she had banked. During the first season, winning the game also earned the right to perform a final challenge outside the studio, sometimes even abroad, for a chance to win a car. All but one contestant successfully accomplished said challenge.

Lasted two seasons on Antena 3, then several years later moved to Telecinco as El nuevo juego de la oca ("The New Game of the Goose"). The latter version was broadcast live and lasted less than one season before being pulled in favor of other programming.