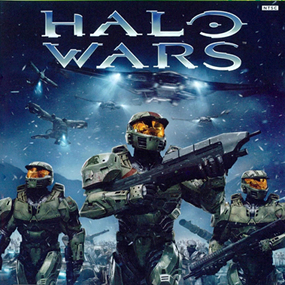 "This is Spartan Group Omega. If they want war, we'll give them war."
Advertisement:

A Real-Time Strategy spin-off of the Halo franchise released in 2009 by Ensemble Studios. It was toted as an ambitious attempt to bring the RTS genre to consolesnote  though it is not the only console RTS, with other examples including Stormrise, Universe at War, and arguably Supreme Commander 2 and fulfilled the original concept of Halo as an RTS series instead of a First-Person Shooter.

The game takes place in the early part of the Human-Covenant War in 2531, roughly twenty years before Halo: Combat Evolved and its sequels. It centers on the crew of the UNSC Spirit of Fire, a former colony ship turned warship that uncovers a plot by the Covenant to accelerate their genocidal campaign on humanity through some newfound Forerunner treasures. The prequel setting draws from all corners of the Halo expanded universe, including more Spartans, preceding Arbiters, other human colonies, and even a Forerunner shield world. It also introduces numerous new units and vehicles, from enormous Vulture airships, to Cyclops mecha and mini-walker Locusts, among others. Being an RTS also dramatically increases the scale of Halo battles. Thought fighting two Hunters as the Master Chief was a challenge? How about twenty of them, supplemented by a fleet of Banshees?

Multiplayer allows one to play as the Covenant as well as the UNSC, with both sides offering different bonus and exclusive units based on the specific leader of the player's army, whether upgrading units quicker, creating mobile mini-bases, allowing ODST troopers dropped across the field, or even calling a Covenant ship to rain fire from above.

An Updated Re-release was released on Steam, Windows 10 and Xbox One in April 2017, titled Halo Wars: Definitive Edition, which includes all the DLC, as well as improved graphics and new achievements.