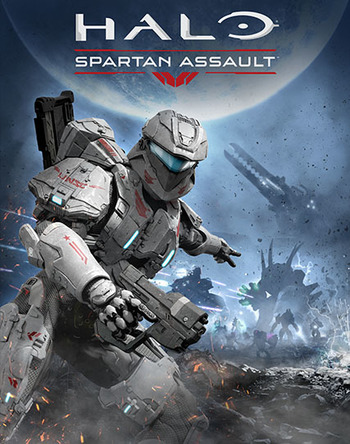 Halo: Spartan Assault is a top-down twin-stick shooter game set in the Halo universe developed by 343 Industries and Vanguard Games. The game is set between Halo 3 and Halo 4 presented as a recreation of those events for training purposes. Set one year after the end of the Human-Covenant War, Spartan Assault follows the adventures of early Spartan-IVs Sarah Palmer and Edward Davis on Draetheus V as they fight through waves of Covenant remnant invaders.

The gameplay uses many of the elements from the FPS Halo games (shooting Covenant, adapting to their AI, occasionally driving vehicles) but is seen from a bird's eye view similar to games like Geometry Wars.

The game was originally released for Windows 8 devices on July 18, 2013, but eventually made its way to Xbox and other PC platforms later on (including Steam), with the Xbox 360 and Xbox One versions adding a two-player online co-op mode in which two Spartans battle against hordes of Flood.