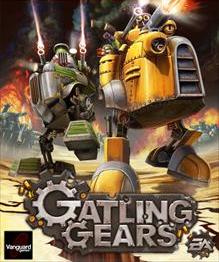 Gatling Gears is a top-down Action Game developed by Vanguard Entertainment and published by Electronic Arts. It features the player in a Mini-Mecha and focuses on upgrading weapons and destroying waves of mooks.

After refusing orders and deserting The Empire army - and leaving behind a career of piloting Gatling Gears, Max Brawley lives a life of leisure and relaxation with his niece Zoe in Mistbound - a world of natural beauty. Years later, the Empire begins to execute a plan to drain all of the natural resources from Mistbound and destroy anyone that stands in the way their goal. Brawley with his niece Zoe then take it upon themselves to fight the Empire and stop their destruction.

Tropes that apply to Gatling Gears