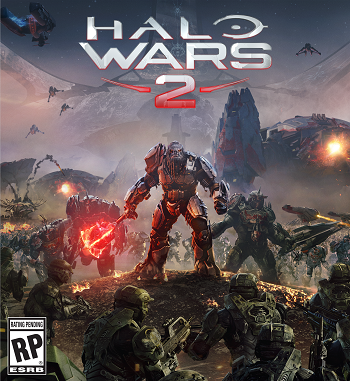 Know your enemy.
"Twenty-eight years, Professor. Let's see what kind of galaxy we woke up to."

Halo Wars 2 is a Real-Time Strategy game set in the Halo universe, developed by 343 Industries and Creative Assembly for the Xbox ONE and Windows 10. It is a sequel to 2009's Halo Wars.

Set in 2559 (twenty-eight years after the original Halo Wars and about a year after Halo 5: Guardians), the story begins with the UNSC Spirit of Fire's crew finally waking up after being in cryo-sleep for nearly three decades, only to find themselves at an ancient Forerunner installation known as "The Ark" (the very same one that the second half of Halo 3 was set on). However, it turns out they aren't the only people there; a hostile Brute-led Covenant splinter faction called "The Banished" have already set up shop, and are seeking to use the Ark for their own nefarious purposes. Despite having completely missed the events of the last twenty-eight years, Captain James Cutter of the Spirit of Fire must now match his wits against Atriox, the Banished's terrifying powerful and brilliant leader.

Like the original Halo Wars, the multiplayer allows the player to choose which side to take command of, with both factions (the UNSC and the Banished) each having multiple unique leaders who each provide their own special bonuses.

The game was officially released on February 21, 2017, with those who bought the Ultimate Edition getting it on the 17th.

A Downloadable Content campaign titled "Awakening the Nightmare" was released on September 26th, 2017. In it the player takes control of the Banished for a single-player campaign, specifically two Banished Brute brothers Pavium and Voridus, as they deal with a Flood infestation originating from the space station High Charity, which had crash-landed on the Ark.