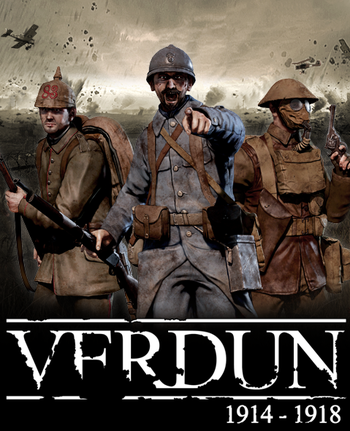 Verdun is a historical FPS game produced by two independent game developers, Blackmill Games and M-2-H Games Studio. The setting is the First World War in which players fight each other as members of one of the various factions during the conflict. Set entirely on the western front, it tries to recreate the scenario of trench warfare as it was during that time. The name for the game was taken from the infamous Battle of Verdun and for the most part is extremely realistic. It is also infamous for being pretty hard.

The game was in development by Blackmill Games for much of 2014 and was released on the 28th of April, 2015 after a year in Steam Early Access.

A free expansion, Horrors of War, was released in March 2016, adding a gore mechanic and playable squads of Belgians and Americans, in addition to the French, British, Canadian and German squads present in the original release. Additional German squads and the Scottish Highlanders were eventually added as well.

The game was also ported to Playstation 4 in 2016, and to Xbox One the following year.

Standalone expansion focusing on the Eastern Front of World War I called called Tannenberg was announced in May 25th, 2017. It features a more open-ended and larger map design compared to the base game to reflect the more mobile nature of the war compared to the Western Front's trench warfare. The expansion went into Early Access on November 16th 2017, and left it on February 13th, 2019.

Welcome to the trenches, soldier! Here's what you'll be seeing: