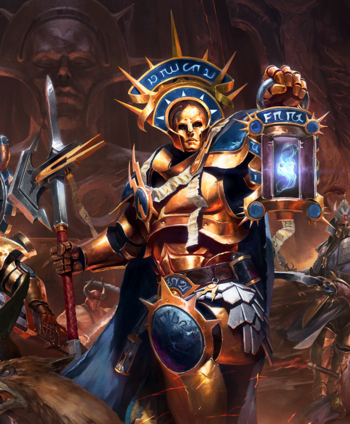 Blind your foes with Sigmar's light.
Merrill: Your armor is very shiny, Sebastian. Doesn't that make you an easier target?
Sebastian: The Light of the Maker is my armor, Merrill. I am not afraid.
Merrill: Maybe you could ask Him to make His Light less shiny? Then you wouldn't need as much armor.
— Dragon Age II
Advertisement:

So, you've just entered your country's military force. And everyone seems to have these really spiffy dress uniforms. Really fancy, with actual silk and gold and precious gems.

Wait, what? Those are combat uniforms?

Yes, some fiction has characters wearing combat uniforms that are more appropriate for dress uniforms.

But they look nice, so artists love to use them whenever they can, especially in anime, manga, comicbooks, and Video Games. (And not to mention paintings and relief sculptures; this trope is very much Older Than Dirt!) In literary genres, where we do not actually get to look at them, these are generally the mark of aristocrats, the Miles Gloriosus, the Armchair Military, and the Glory Hound. On the other hand, the serious soldiers are more practical and drably dressed, and certainly regard looking splendid as a much lower priority. Only their dress uniforms embody the trope — if then.

Personal weapons may or may not involve Bling-Bling-BANG!. The hat is often a Commissar Cap. Officers and senior enlisted may carry some stick or baton indicating their rank, and expect their chests to be covered in various jangling medals. Futuristic settings can even have Powered Armor or Humongous Mecha in this style.

This can overlap with Impossibly Tacky Clothes, when the work is making a Take That! to this trope, or dealing with cases where the uniforms are purely for showing off wealth rather than conveying a kind of aristocratic dignity. Historically many successful mercenaries have tended to dress in elaborate and expensive ways, given that this was one of the few reliable status symbols they could spend their money on, and such get-ups are much more likely to be regarded as tacky and unsophisticated.

A sub trope is one where an individual disdains the awarding of such medals and ribbons and refuses to wear them. This is always an indicator that the person in question is a real badass, especially in comparison to the Fake Ultimate Hero (who will usually play this trope straight).

This trope is very much Truth in Television; see the Analysis Page for more.