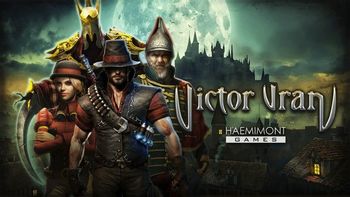 Victor Vran is a Action RPG for PC, by the Bulgarian studio Haemimont Games. Set in a Dark Fantasy world with some Überwald inspiration, the game puts you in the shoes of Victor Vran, a Demon Hunter possessing some demonic powers. After receiving a letter, Victor goes to the monster infested city of Zagoravia, looking for his friend Adrian, a fellow Demon Hunter, and ends guided by a mysterious voice.

Featuring heavy combat in isometric view (graphics are in 3D and the camera can rotate freely around the protagonist), the gameplay is superficially similar to the famous Diablo series and its followers, except it puts even more emphasis on mobility during fights, as the game allows to roll and jump. Jumping also make levels a bit more open (since you can jump over a wall) and serves to reach some secrets. The game also features five challenges for each map (they can be things finding all secrets, killing a number of enemies without being hit or before a timer expires, killing a boss, etc.), which grant experience at completion.

The game has no proper character class. Victor's abilities are only determined by his inventory.

The game was first released in Steam Early Access in February of 2015, and was then officially released in July 2015.

The released DLCs are: