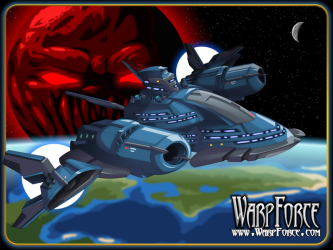 That's no moon... Well, the one on the right is. But the one on the left, totally not a moon.
"A time of victory is only well-spent if it is spent preparing for the next threat..."
— Garavin, in the opening quest
Advertisement:

WarpForce is the fifth Artix Entertainment game and, like the others, is browser-based. The game is an expansion of sorts to the original AdventureQuest, and as such takes place during AdventureQuest and uses the same gameplay as it, except in out-of-space following the WarpForce group. On July 27, 2011

it was announced that new content would be released on a bimonthly schedulenote having been moved from it's original monthly schedule to lessen the workload on the creators, with each release usually containing at least one quest. The game is mostly free-to-play, but gains income from a one-time upgrade called WarpGuardianship which unlocks extra quests and items, as well as offering Z-Tokens which can also be used to get exclusive items.

The WarpForce is La Résistance from the planet Lore, a fantasty land filled with magic and dragons, focused on fighting the Network who are an evil group of (mostly) aliens who go around enslaving and killing many aliens and people. However, magic is not as widespread in space as it is in Lore, and the WarpForce must use more tech-oriented gear. The Hero goes aboard the LSS (Lore SpaceShip) Alteon, and then goes around sticking it to the Network, resolving environmental problems, and arresting wrongdoers, which were completely unrelated to the Network.

The player can choose to be one of three races: human, elf, and drakel. The game, as said above, uses the same gameplay as AdventureQuest, except with "Gauntlets" instead of shields, "Tech" instead of spells, and "Battlesuits" instead of armors. Each battlesuit has a few extra skills installed, making it similar to a mini-class, though some weapons also have special attacks. The game is fond of Shout-Outs to other works, so much so that it now has its own page.