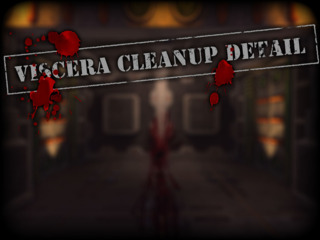 "Oh, it's a dirty job but someone's gotta do it!"
Advertisement:

Have you ever played through a First-Person Shooter or watched an action-packed sci-fi movie with Gorn, seen somebody be reduced to Ludicrous Gibs and thought "Boy, do I feel sorry for the poor schmuck who's gotta clean that up"?

In Viscera Cleanup Detail, that "poor schmuck" is you.

Viscera Cleanup Detail is an indie first-person simulator game, developed by Runestorm. It entered Steam Early Access in April 2014 and was fully released in October 2015.

The year is 2183 and you are a janitor working for Aerospace Sanitation Inc. The Company takes contract work from other space-faring corporations and as a result you are sent to clean up various space stations, colonies, and ships. No problem, you say? Not when these locations have been the sites of major catastrophes, leaving them one giant mess of body parts, gore, blood, shell casings, bullet holes, and rubbish. Your job is to take out the trash and leave the place sparkling.

Trust us, it's much more fun than it sounds.

You enter each level with four tools: A mop for cleaning up blood, soot, and other fluids; a "sniffer" that can detect nearby messes; a PDA for taking notes; and your hands for picking up trash. Additional tools such as brooms, shovels, and welding lasers can be found within the level. Vending machines produce buckets for cleaning mops, bins for collecting trash, and other useful items while incinerators dispose of any trash. At the end of your shift the Company will evaluate your performance based on how thoroughly the site was cleaned. Bonus points can be earned by stowing cargo properly, filling out paperwork, and performing other menial tasks.

There are four side games: