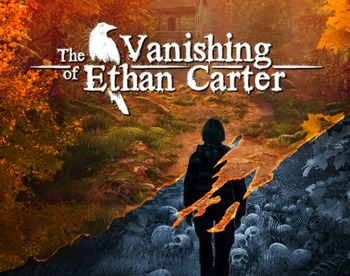 The Vanishing of Ethan Carter is an Environmental Narrative Game by The Astronauts (who consists of former People Can Fly staff). In 1973, the paranormal investigator Paul Prospero receives a fan letter from 12-year old Ethan Carter, inspiring him to journey to Ethan's hometown of Red Creek Valley, Wisconsin. Upon arrival, he learns that the town has been abandoned for well over a decade after a mine collapse killed off its economy. Furthermore, the Carter family's house had recently burned down in a fire, leaving no survivors.

The Vanishing of Ethan Carter is set in an open world environment, in which the player can roam around and explore at will. The player can use paranormal abilities in order to solve crimes and puzzles, such as sensing where important objects are located and reassembling the timeline of events tied to a certain death.

The game was released on PC on September 26, 2014. The game has since been ported to Unreal Engine 4, which allowed its release to the PlayStation 4 on July 15, 2015. This version was also released on the PC under the name The Vanishing of Ethan Carter Redux, and is free to anyone who owns or purchases the original game.

Definitely NOT to be confused with professional wrestler Ethan Carter III.