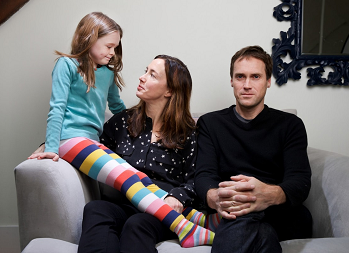 Wife 1: You said, "If a bus is coming and they're going to run both of you over, I would help the baby." And I was like, "Ok, that's understandable."
Wife 2: No, but I think she got really upset and I think that was like a turning point in our relationship, because I think you were like, "I thought I was the center of your universe, and now I'm not."
— Where Should We Begin?, "Motherless Woman"

This is the mom or dad who competes with their child for their spouse's affections. Quite simply, they see the kid as the third side of a Love Triangle (though not in that way... we hope).

This can be understandable, to some extent: becoming a parent is a major life change for a couple. Even the Sickeningly Sweethearts will get a rude wake-up call when their child is screaming to be fed just as they settled down for a snuggle. Babies require time, money, affection and attention... and that means, no matter how hard mum and dad try to carry on as normal, someone or something else is going to have less of those things. Usually, in fiction at least, it's the spouse/partner. And if it's not, that can easily slide into Parental Neglect.

Suddenly, they are no longer the center of their partner's universe. They may feel that their wife/husband/partner no longer regards them as a "lover," but rather as "the other parent of my child." It's not that their husband/wife doesn't love them any more — it's just that children need more care than adults, and that means more time. Some partners have real trouble with this, especially when they're left kissing thin air because their partner ran off to tend to their child.

Dad is more likely to be the resentful party, although resentful mothers aren't unheard of. In the case of mum, she'll often have felt resentful throughout the pregnancy, and angry that her partner keeps talking to the "bump" instead of her. She may accuse her husband of treating her as a walking incubator, not the woman he fell in love with. Usually, the "social demotion" aspect of motherhood (for example, a woman feeling that she loses her identity as a person because other people see her only as a mother) will be a major theme in the plot, and her jealous parent characterization will be tangential to that theme. In the case of dad..? He's more prone to getting the Manchild treatment. His wife is almost certain to complain that she now has "one extra baby" rather than a partner. A male jealous parent is less likely to receive Character Development than a female: his jealousy will be either a permanent flaw or, on the other end of the scale, Played for Laughs.

Resentful parents fall on a sliding scale of understandable to Jerkass:

There is, of course, a step-parent variant, where the new partner is jealous of their love interest's children from a previous relationship. The symptoms of being a jealous parent remain the same, but the motivation is usually different: a jealous biological parent is resentful because they were there first and feel that the child has "stolen" their lover's attention; a jealous step-parent is resentful because they know that the children were there first, and therefore they will never have their partner's undivided attention.

This is often the flip side of the Oedipus Complex. Sub-trope of Parents as People. Audience sympathy tends to vary according to how well they knew the parents before they became parents: The Hero who marries his Love Interest and has Babies Ever After tends to be more sympathetic than the guy we meet mid-tantrum, as his wife is changing their son's nappy.