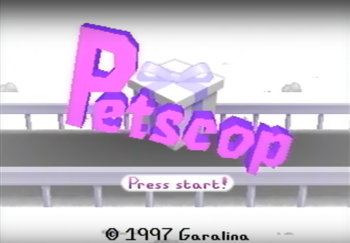 Alright, so, uh... this is just to, um, prove to you that I'm not lying about this game that I found...
— Paul, in the first video
Advertisement:

Petscop is a series of YouTube videos chronicling someone's bizarre experiences with a mysterious and unfinished PlayStation game known as the titular "Petscop".

The series begins with the uploader of the videos, known as "Paul", saying he found the game with a strange note attached and wants to show a secret he discovered. At first, the game starts off normally, with Paul traversing through a colorful and cheery world with the goal of collecting the creatures known as "pets". However, once Paul inputs a code written on the note, it becomes clear that there is much more to be uncovered about the game...

After years of anonymity, the project's sole creator, Tony Domenico

, revealed himself in November 2019. On Thanksgiving 2019, the series officially concluded with a total of 24 videos and a soundtrack

There is a fanmade recreation, Giftscop, found here

which allows you to play the game yourself.

See also Nifty, a loose predecessor; Sheriff Domestic, a fanmade parody of the series; and Household Felony, a Spiritual Successor.