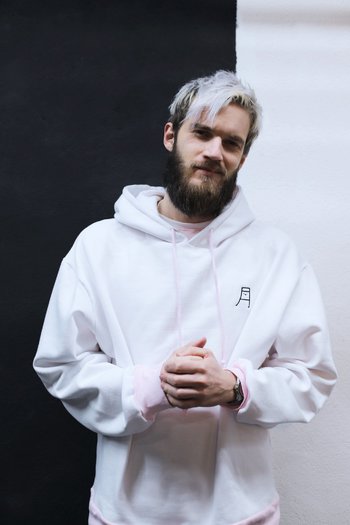 , is a Swedish YouTuber who currently owns the most subscribed-to independentnote Important distinction; he was surpassed by the Indian corporation T-Series in April 2019. channel on YouTube with over 111 million subscribers. After first becoming immensely famous for his Let's Plays, he now does wider arrays of comedic content, mainly based on providing commentary, with some of his most famous series including Pew Newsnote in which a dizzying number of characters all played by Kjellberg discuss YouTube news (although Kjellberg himself rather conspicuously gives his own serious opinions); and that's not even getting into the wider story., Meme Reviewnote where Kjellberg comments on one or several new memes, and LWIAYnote short for Last Week I Asked You; a shameless expy of the Jacksfilms series Yesterday I Asked You (YIAY) where Kjellberg looks at fan-submitted memes on his subreddit

Kjellberg initially set out to pursue a degree and career in business (to specify, industrial economics and tech management), eventually dropping out due to personal dislike of schoolnote not solely to start his YouTube career, as has been commonly reported. When he leaned into making YouTube videos, registering his YouTube channel in 2010, he got a huge following primarily from his horror LPs due to his reactions, recurring characters, Running Gags (namely a hatred of barrels), tendency to curse, exceptional hamminess, and general bizarre humor.

Kjellberg's channel grew substantially in the following years, becoming one of the fastest-growing on YouTube in 2012 and 2013 before eventually overtaking Smosh as the most-subscribed channel in August of the latter year. As a result, saying that he's a prominent figure on not just YouTube but the Internet — especially for outsiders and media personalities looking in — is now an understatement. His prominence has given him the ability to Colbert Bump whatever he chooses to give exposure to, especially if it's obscure, but it has also made him one of the most controversial YouTubers on the platform.

Kjellberg has also been known to collaborate with the higher-ups of his networks. In late 2015, following the announcement of YouTube Rednote now YouTube Premium, a paid subscription service for the site, news broke of Kjellberg starring in a series named Scare PewDiePie, made by the creator and executive producers of The Walking Dead and revolving around Kjellberg going through real-life places designed after the horror games he became famous for playing. The first season of the show was released from February to April of 2016, the same year that Kjellberg also initiated his own personal YT network under Maker Studios named Revelmode. Both Kjellberg's network and plans to release a second season of Scare PewDiePienote now called Scare PewDiePie: Multiplayer, co-starring Jacksepticeye, and slated to premiere in March 2017 were shut down following a particularly nasty controversy.

Kjellberg has also collaborated with studio Outerminds to produce the games PewDiePie: Legend of the Brofist, PewDiePie's Tuber Simulator, and PewDiePie's Pixelings, alongside writing a self-aware demotivational self-help book titled This Book Loves You, and—with the help of his fanbase—raising over one million dollars for multiple charities.

His Italian wife, Marzia Kjellberg (nee Bisognin), formerly prevalent in the YouTube beauty community, has her own page here.

His videos include instances of: