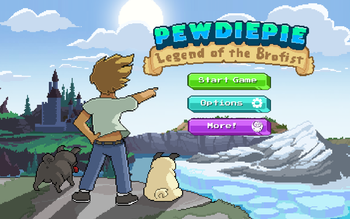 Felix had long-time aspirations for launching his own video game, and in December 2014, he revealed to his fans that he was collaborating with Outerminds to make a PewDiePie-themed video game. He was heavily involved in the game’s development to ensure that it would turn out the way his fans would have liked.

The game was released for iOS and Android on September 24, 2015, but the fact that it wasn't free (costs $4.99) was subject to mass controversy, with Felix intervening to explain that it was only justified that the company who made the game get paid. Also, the game became the top-grossing paid game in the US App Store less than two hours after its release. The Microsoft Windows and OS X versions were released on December 10, 2015, with additional co-op mode.

You get to play as the following characters: