Video Game / Can Your Pet? 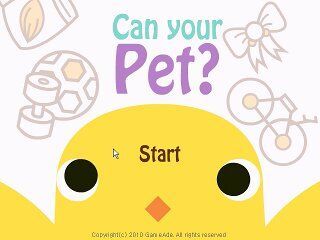 is a Flash game created by Korean developer GameAde, released around 2010.
Advertisement:

It's a simple game, really. You have a little yellow pet chick, which you name and accessorize. You can feed him, give him a bath, and as you take care of him, unlock more things to do with him, like play ball, video games, or take him cycling. Very lighthearted.

A mobile version of the game is available, along with sequels and spin-offs, like Can Your Lemon and Can Your Pet: Returns.