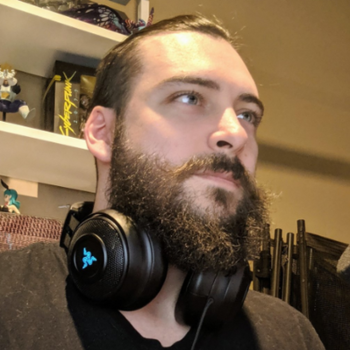 He got his start as a member of the Yogscast and is currently independent after leaving the team on good terms in 2015. He was a longtime community member, turned admin, turned content producer after Lewis Brindley hired him for a job. He's renowned for his real life strength and badassery. His content focuses on a variety of games, including Minecraft and Dark Souls. Nowadays streaming is his main focal point, with YouTube serving as an archive of his streams and past videos.

While he initially worked at Yogtowers, he has moved to the USA as of January 2014 to be with his girlfriend Dodger, although he remained a member of the Yogscast until December 2015. He's also the oldest brother of George Thorne, an English footballer who has played for West Brom since 2009.

In 2015, Strippin moved back to the UK due to issues with his visa, and began regular streaming on Twitch. He announced his departure from the Yogscast in December that year. He also proposed to Dodger around the same time (she said yes) and the two married on June 22, 2017.

He can be found on Twitch

, and a seldom-used Tumblr page

Tropes that apply to Strippin: