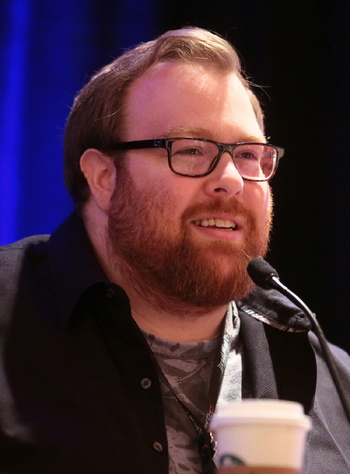 Jesse Louis Cox (born May 18, 1981) is a Youtube personality whose channel is focused on gaming (more specifically, Let's Play). Originally under the name of OMFGCata, it started out as a center for comedic Let's Play videos and coverage of of the World of Warcraft Cataclysm beta. Since then, he has branched out into other games such as Minecraft and Terraria. Since the channel was founded, several other members have joined the Jesse's adventures, including Pride (aka The Smoking Gamer), Blondie, the Co-Dependent Girls (Aevynne, Trish, and Chiib), Cloudcuckoolander Crendor and the regular builders of the Minecraft RPG Makers series. While he does frequently collaborate with various people, he primarily focuses on single player games, with his comedic style relying on portraying himself as his character's inner voice or an observing bystander.
Advertisement:

A popular "miniseries" on his channel is the Scary Game Squad, where Jesse, Jirard, Davis, and Alex Faciane (and occasionally Crendor) play Horror games at various states of inebriation. The SGS crew has further spun off to create the Star Wars New Canon Book Club reviewing new comics, novels and movies, and speculating about upcoming changes to the Expanded Universe. Another project he's helped launch since 2018 is Chilluminati, where Jesse, Alex Faciane, and MathasGames discuss and generally mock major conspiracy theories like Alien abductions and the Hollow Moon Theory. Finally, Jesse has begun running an Actual Play RPG stream on Twitch titled "Oddballs," with himself as Game Master and fellow streamers Octopimp, Morgan Webb, Cinnamon Toast Ken, and Elspeth Eastman in a Stranger-Things esque, shenanigan filled adventure.

Beginning in 2019, Jesse's newest venture to be teased

Formerly a member of Polaris, and frequent collaborator with fellow members TotalBiscuit, Wowcrendor (with which he co-hosts a non-content pocast), and occasionally the Yogscast. Also, he has his own convention (CoxCon, which is held yearly in the UK).

Tropes that apply to Jesse Cox: