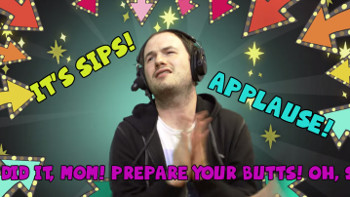 Sips, real name Chris Lovasz, is a Canadian-British Let's Player and a member of the Yogscast. At some point before he made gaming videos for them, Sips worked as the Yogscast's web designer.

During his rise to popularity on YouTube, he collaborated with Sjin, Lewis Brindley, Turpster and Hat Films on vanilla and modded Minecraft series. After around three years of mostly regular Minecraft videos, he moved to playing other games that interested him and eventually stopped doing Minecraft on his own channel while still collaborating on Minecraft with other Yogs until the end of the last Yogscast "main channel" Minecraft series Whale Lords. At the end of 2017, Sips moved mostly to Twitch streaming and stopped uploading videos to his YogscastSips Youtube channel

, though he does upload his Twitch streams to a separate Sips - Live!

He's known for his casual style with lots of improvisational humor. His Minecraft co-op series are largely filled with aimless or laid-back conversations with the other Yogs and not a lot of progress. He also plays banter-filled rounds of Garry's Mod minigames with Hat Films and Turps, such as Prop Hunt, Trouble in Terrorist Town and Murder. Even in his solo series, he frequently has humorous one-sided conversations laced with sarcasm and profanity towards the characters (and in some cases, inanimate objects) in the games he plays. His content is generally aimed at a teenage to early adult audience.

He has done a bit of voice work for web animation shows. He voiced the blue spaceman in Spacemen and the blue ninja, "the Burrito Bushido", in Ninjas.

Sips can be found streaming on his Twitch channel

; the recordings of these streams get uploaded to his Sips Live channel

on Youtube. His videos from when he was still active on Youtube can be found on his YogscastSips channel here

Sips provides examples of these tropes:

Why is the belt below his ass?

Hot off the heels of Duncan's Magma Cream joke, Sips discovers Simon's error in the Santa statue he's building, causing everyone to laugh their heads off.

Example of:
Laugh Themselves Sick

Why is the belt below his ass?

Hot off the heels of Duncan's Magma Cream joke, Sips discovers Simon's error in the Santa statue he's building, causing everyone to laugh their heads off.