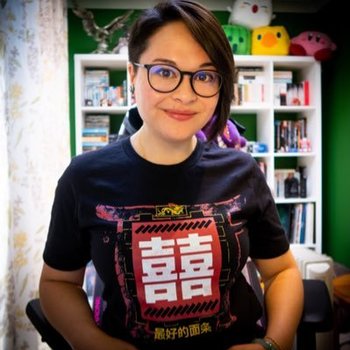 Kim Richards is a Let's Player and a member of the Yogscast. Prior to recording and editing on her own channel, she edited for the flagship Yogscast channel from 2012. She has a background in print journalism for various video gaming magazines, and has also worked for PlayStation Access both in front of and behind the camera.

Her focus is story-driven or horror based games (the latter frequently while alternating playthroughs with Hannah Rutherford, dubbed "Fright Nights"), but she has also had several modded Minecraft series while partnered with Duncan Jones.

to focus on Twitch, although she would still make appearances on other peoples' channels, and would upload travel vlogs from time to time. She also stressed that she was not leaving the Yogscast, and would remain a member for the foreseeable future.

giving an update on her life, including giving some reasons on why she left Youtube/Twitch (chronic pain problems and the constant hateful messages she would receive), and also that she was engaged and would be getting married in August of that year.

In October of 2019, she made a triumphant return, looking happier and healthier than she had in a long while, and is now uploading videos on a semi-regular basis, as well as streaming (both with the other Yogs and with her husband).

As of 2021, she seems to be back to focusing mainly on Twitch.

, and her Twitch channel can be found here