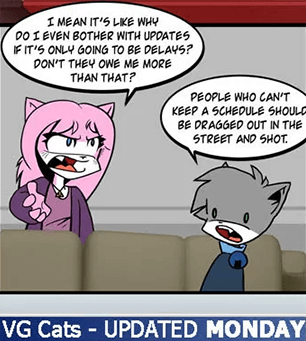 Posted on a Tuesday.
"I love deadlines. I love the whooshing sound they make as they fly by."
— Douglas Adams
Advertisement:

The publishing/performing deadline/showdate has been missed. This can happen in any medium, but it happens a lot with webcomics.

Many webcomics are haphazardly written and posted, especially since the majority are written part-time as a hobby. Unless an author is careful to maintain a Strip Buffer, scheduling conflicts can result in strips being released late, be it hours, days, months or (in a few notorious cases) years.

Extreme cases of schedule slip may result in an Orphaned Series. Filler Strips are often used to cover for short (or even long) breaks in a series which is otherwise moving on schedule. On the bright side, this can help alleviate Archive Panic caused by date of first publication. The fact that so many webcomics adopted a "MWF Schedule" for their updates (meaning Monday-Wednesday-Friday) and then quickly fell into chronic slips led to the schedule being jokingly redubbed the "Maybe-Whenever-Forget it schedule."

Whether the lack of an obligation to make every deadline molds webcomics into a fundamentally different direction than commercial ones is left as an exercise for the reader. One reason Penny Arcade is still highly respected as a gamer comic is, among other things, avoiding delays after becoming a professional business.

As the non-webcomic examples of this phenomenon very much prove, even professional comic and manga creators are not immune from this, it's just more noticeable with webcomics due to the medium's properties. This also flows into Machinima and other works under the Web Original umbrella, as well as Fan Works.

Many times, the Schedule Slip is caused by a Creator Breakdown or something happening in real life. Often when this happens, the creator will mention that something has happened in real life that's prevented them from working on it. Compare Irregular Series, where the irregularity of releases is by design.