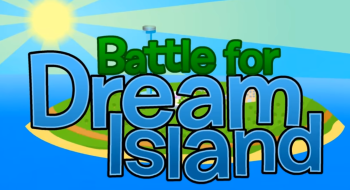 Battle for Dream Island is a unique animated comedy web series created by Flash animators and sibling duo Cary (who later created Ten Words of Wisdom) and Michael Huang, a.k.a. jacknjellify. Inspired by Total Drama Island in premise, and Homestar Runner in art style and animation style, its enduring popularity led it to become one of the first and most successful of the Object Show style of web animation.

Okay, so there's this luxurious island. And there are twenty anthropomorphic objects that all want the island for themselves. But only one will get to own it. Who is it? The teardrop? The ice cube? The sponge? The flower? The tennis ball? Or any of the fifteen others? Well, there's only one way to settle this... and it's a reality series, where they will compete in challenges until only one remains.

But who will get voted off each episode? That is entirely up to the viewers. Each episode comes out on a monthly basis, and with each episode crazier than the one before it, who will end up winning the big prize is anyone's guess!

The first season began on January 1, 2010, with new episodes every month. It finished on January 1, 2012. A second season, Battle For Dream Island Again began on June 29, 2012, but suffered serious Schedule Slip, and has had no new episodes since August 2013, despite Jacknjellify repeatedly stating it will come back. It finally did on September 1st, 2016... as a "third season", IDFB, which was also Cut Short after the first episode.

And then a fourth, more silly, random, surreal, looser, and oddly dark season, named Battle for BFDI, came into existence on November 3rd, 2017. It has all the BFDI and BFDIA characters in it, including the ones flung to the LOL, along with some new characters, for a total of 64 contestants—the hosts, Four and X, came from a previous animation called "X Finds Out His Value".

On August 29, 2019, American book company Scholastic published an official character guide for the show, which describes all the 64 contestants.

On January 1, 2020, BFDI turned ten years old, becoming one of the longest-running web series of all time in the process.

The series splintered into two shows on March 25, 2020, with the release of "The Escape From Four", the 16th episode of Battle for BFDI. The episode acted as a double Backdoor Pilot for both a new show named Battle for Dream Island: The Power of Two (abbreviated "TPOT"), which has a new host, Two, and took most of the contestants, and Battle for BFB, a continuation of Battle for BFDI still featuring Four as the host, which takes the remainder.

TPOT released on January 10th 2021. Battle for BFB (now with a much smaller cast) wrapped up April 9th, 2021, meaning that the BFDI franchise has finally finished a second season. Only took eleven years.

The success of the show inspired many shows in a similar vein, like Inanimate Insanity, Object Overload, Brawl of the Objects and more.

Now with its own drinking game!

See Battle for BFDI for tropes.

Tropes added in BFDI: The Power Of Two

See Battle for Dream Island: The Power of Two for tropes.

Ruby asks how everyone is going to get down from the Yoyle tower, and they had to jump off.

Example of:
No Escape but Down

Ruby asks how everyone is going to get down from the Yoyle tower, and they had to jump off.