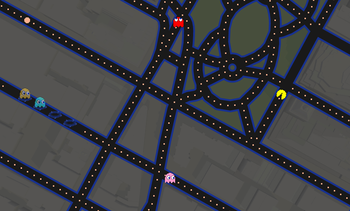 Google released their new game Pac-Map on 4/1/15.
"APRIL FOOL, n.: The March fool with another month added to his folly."
— Ambrose Bierce, The Devil's Dictionary

A long time ago, April 1st was the start of the new year, and after it was officially changed to January 1st, people who still celebrated at the old date were dubbed "April Fools". Or possibly the term originally referred to people who prematurely celebrated the start of summer (which was traditionally May Day, May 1, in many ancient cultures), only to be met with lingering snowfall; the exact origin is unclear. Regardless of where the term originated, it has since become something much sillier.

April 1 is known as April Fools' Day, where almost every single person in the world becomes The Fool. A time to trick Muggles that the joke is real, and a time to pull pranks and tricks. You will then reveal the trick with the line "April Fools!"

Many works of the media include April Fools' Day jokes: usually articles presented as news or truth that go beyond the limits of sense, contain blatant inaccuracies, would be completely outrageous etc. They usually assume Viewers Are Geniuses and that no one would be stupid enough to take it seriously, but of course that's not always true. People are often taken in, get outraged, get laughed at, get to made feel stupid. A good time is had by all.

In the 1990s and early 2000s, a common April Fools' Day Joke on Webcomics was for two different webcomic authors to each do the other's strip. By far the most popular joke on the Internet seems to be a claim by the owner that the website is shutting down. A common joke specific to fansites is to suddenly denounce what the fansite stood for and revamp it to focus on a different franchise, most commonly one that bears similarities to the original, or even a competing one. Another joke specific to gaming sites with free content is the introduction of a "premium" version of the site, where it's said one gets exclusive content if one pays for it; generally, the site makes "preview content" available, with most of the "premium perks" turning out to be silly (or duplicates of free services by other sites devoted to the game).

Subversions of April Fools' Day are to have something improbable published on that day be actually true (either on that day or on a later date, or when a prank goes just a little too far).

In any case, woe betide someone who dies (or worse, is born) on April Fools' Day. And God help you if a natural disaster happens and people think the blaring sirens are a prank.