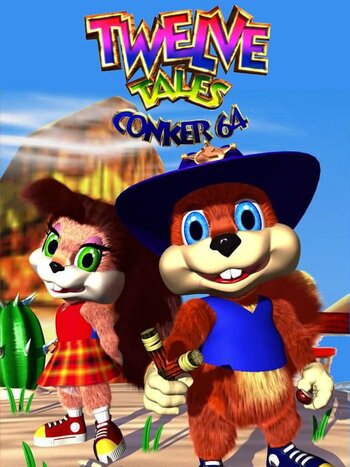 A look at What Could Have Been for Conker.
Advertisement:

Twelve Tales: Conker 64 is an unreleased Nintendo 64 platformer by Rare. It was ultimately retooled into Conker's Bad Fur Day.

Originally titled Conker's Quest, the game starred a Funny Animal squirrel named Conker. Conker and his girlfriend Berri travel through a brightly-coloured world collecting a hundred house-warming gifts that were stolen by the Hoodlums. There were numerous different levels, including a wild western-level, a gladiator arena level, and a jungle level.

While the game was praised for its promising nature, several critics bemoaned Rare doing another cute platformer. They had previously released Banjo-Kazooie, Banjo-Tooie, and Donkey Kong 64 on the console. Twelve Tales: Conker 64 would be their fourth and final collectathon for the Nintendo 64, though it had been in production alongside the original Banjo-Kazooie. In response to the criticism, Rare did something unheard of: Mid-development, they overhauled their cute kids game into a very adult title.

Conker's Bad Fur Day kept the cute character designs, but aged up Conker into a drunk, cynical adult. Full of violence, cursing, and Toilet Humour, Conker's Bad Fur Day ended up becoming one of the most infamous games ever due to the Subverted Kids' Show theme.

However, that's not to say Conker's younger incarnation never made it past development of Twelve Tales. Conker appeared as an Early-Bird Cameo in Diddy Kong Racing and he also appeared in the Game Boy Color title Conker's Pocket Tales. According to promotional material for Conker's Bad Fur Day: Live and Reloaded, both Twelve Tales and Pocket Tales canonically took place when Conker was a kid.