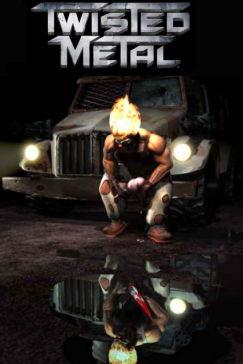 "I see a red door and I want to paint it black..."
Style, sophistication, the ability to launch napalm into oncoming traffic. If these are the things you look for in an automobile, it's time you test drive Twisted Metal.
— Commercial for Twisted Metal 2
Advertisement:

Dubbed "Doom with cars", Twisted Metal is a series of demolition derby games that allows the player to choose from various vehicles armed with guns, missiles, and other weapons. The prize? You get one wish from the man in charge, Calypso. You can wish for anything you want in the world, no matter what the cost, how rare it is, or impossible it would be to obtain. But Be Careful What You Wish For, you might be surprised at what you get.

Twisted Metal 1 first appeared on PlayStation in 1995. It and its immediate sequel Twisted Metal 2 were created by Singletrac, and were regarded as the best in the series. After those, 989 Studios took over and made Twisted Metal 3 and 4, which changed, among other things, the graphics to a more "3D" look (while the first two were in 3D, things like weapon pickups were 2D sprites), several characters' backstories, and in 4, even the origin of the wish-granting magic. Twisted Metal changed hands once again, this time back to the original developers (then known as Incognito, Inc.), who released Twisted Metal Black for PlayStation 2. Black was considered Darker and Edgier, even in a series revolving around killing anything and anyone that moves, due to new takes on characters and their backstories. Shortly after, Twisted Metal Head-On was released for PSP, which "went back to the series' roots," and takes place directly after Twisted Metal 2, making 3 and 4 Canon Discontinuity.

The eighth entry into the series, simply titled Twisted Metal, was released on Valentine's Day 2012.

I am Calypso. And I thank you for reading the Twisted Metal article.

Example of:
Lonely at the Top