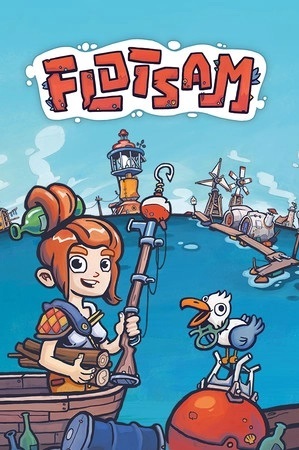 Flotsam is a cheery Survival Sandbox Space-Management Game set in a post-apocalyptic, flooded world. The starting point is one functional boat manned by three drifters and the goal is to build a functional, mobile town around with all the trash society left behind when it came to an end. Flotsam is being developed by Pajama Llama Games as the company's first long-term project. It entered Steam Early Access on 26 Sept, 2019.

As of June 25, 2020, the challenge of the game is limited to managing hunger, thirst, and tiredness of the crew, further challenged by disease and increasing stat penalties for each day needs aren't met. Each drifter comes with a randomly selected pre-flood and post-flood skill presented as their backstory that determines their stat perks, which aren't affected by the aforementioned penalties. Also recruitable are seagulls, which scavenge the sea's surface for plastic and wood, thereby freeing up time for the drifters.