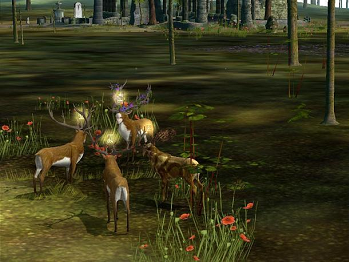 The Endless Forest is an MMORPG for Windows PCs, first released on February 15th, 2006. Every player is a deer in a forest, without goals or the ability to chat. Unique pictograms above registered deer's heads help to identify each individual. Players communicate with each other through sounds and body language. And that's all there is to it. You start the game as a fawn and play as one for 30 days before you mature into a stag. The entire time you run around in an endless forest as a deer, rubbing against trees, braying/mooing, and emoting to other players. You can also cast "forest magic" on each other, which changes pelts, masks, antlers, and even species.
Advertisement:

The creators (also known for The Path) get a lot of feedback for the game through the official forums, though it only gets any major updates maybe once a year. However, there is an upcoming update known as Phase Four, which plans on bringing optimization, new scenery, new types of magic, pelts, and even a mysterious being known as the "Sundeer" into the game.

The community is very dedicated to the game, even going so far as to create in-game legends such as the Deermuda Triangle, a triangle formation of three glitched (duplicated) rocks in which strange things are supposed to happen.

And did we mention that all the deer have human faces?