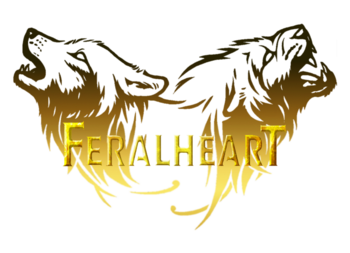 Feral Heart is an MMORPG developed by KovuLKD. It is animal-themed and inspired by the works of Disney, most notably The Lion King (1994). In the game, players can create their own animal characters, feline or canine, and explore several pre-made maps, or make their own. The game is themed around user-controlled roleplaying, with no goal other than to meet up and chat with others.

It was created to be the replacement to KovuLKD's previous game, Impressive Title, with a more realistic art style in contrast to the cartoony, Disneyesque-styled characters of the previous game. Additionally, it was also made to be much more user-friendly to content creators by adding Map Maker, Sky Maker, and Object Maker modes to allow editing maps and objects in real-time. Though the most contrasting change was the lack of hunt-able prey and decorative items that Impressive Title had, which was done in response to the frequent theft and drama associated with them. However, as of January 2012, items were added back into the game but can only be accessed through the Character Customization screen and downloading the content from the official forums.

The game was released on January 1, 2011, with the server first coming online in February, a year after the previous closure of Impressive Title. The website and game download can be found here