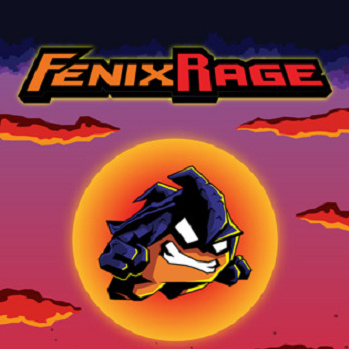 Fenix Rage is a Platform Game, developed by Costa Rican Green Lava Studios in Game Maker, published by Reverb Triple XP and released for PC on September 24th, 2014. It had eventually received an Updated Re-release titled Fenix Furia, which was ported to PS4 and Xbox One in June 2016.

In this game, the player controls a small blue creature with a love of cookies called Fenix, who finds his town and its inhabitants frozen solid by a cloaked villain Oktarus in the opening scene. Now, Fenix must go across the nine worlds inhabited by hundreds of minions to bring him to justice...and not forget to collect all the cookies he finds on the way!