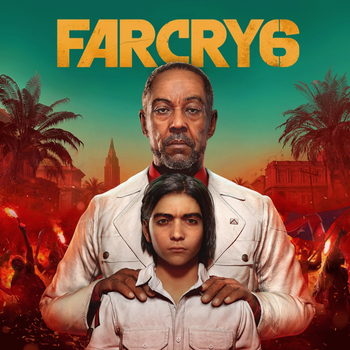 "Our country is like this grenade. Except, it has two basic parts. Our people... and you. And you must clutch them nice and tight, or we all go 'boom'. Do you understand now? Prove it."
— Antón Castillo
Advertisement:

Far Cry 6 is the sixth main entry of Ubisoft's Far Cry franchise. It was announced in July 2020, and was slated for release on February 18, 2021 on Microsoft Windows, PlayStation 4, PlayStation 5, Xbox One, and Xbox Series X|S, only to be delayed to October 7, 2021 due to the COVID-19 Pandemic.

Antón Castillo (played by Giancarlo Esposito) is a tyrannical dictator hellbent on restoring the Caribbean nation of Yara to, in his eyes, its former glory. He also plans to groom his young son, Diego, into becoming his successor. Players take control of Yara native Dani Rojas, a resistance fighter who initially is trying to flee the country, but is quickly roped back into La Résistance's plans to take back their land.

Ablaze published Far Cry Esperanzas Tears, a comic centering around Juan Cortez before the events of the game, releasing in 2021 in the original French and on October 12, 2022 in English.

; a series of DLC where players play as the three aforementioned villains in their own stories, and an Updated Re-release of Far Cry 3: Blood Dragon.note On consoles anyway - PC players simply receive a free copy of the original Blood Dragon release instead.

"Who's watching who?"
"Are you finally ready to be what I need?"
— Citra
Control 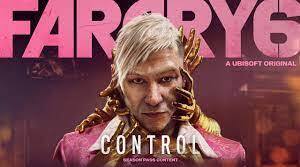 "I, too, am a king who isn't afraid to slaughter to get what he wants."
"Once upon a time, there was a king and a goddess who fell deeply in love..."
— Lakshmana
Collapse 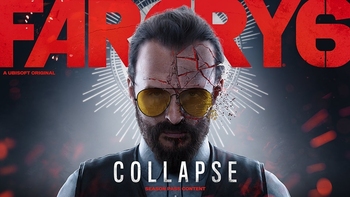 "You are alive. That is all that matters."
"There is no coming back from this, Father."
— Faith
The Vanishing