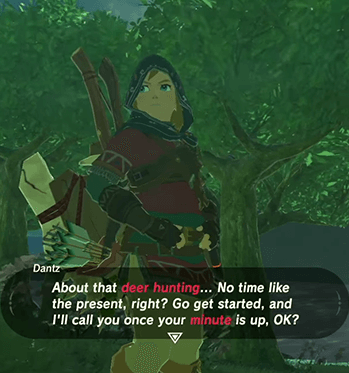 A hunting minigame allows the player to hunt wild beasts.

It can be for various purposes: procuring meat for healing or feeding, getting drops to sell as Shop Fodder, Experience Points or simply to train one's shooting skills. Can also be done to acquire 20 Bear Asses.

Such games can either be Luck Based Missions, where the probability of success depends on a stat of the player or even on the Random Number God. Other games give a greater role to the player, letting him aim to the animals. Products can be used in Cooking Mechanics.