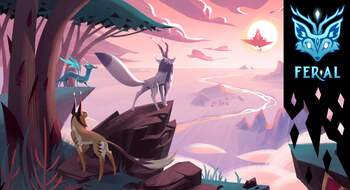 Feral (stylized as Fer.al) is a Massive Multiplayer Online Game developed by WildWorks and released for closed beta testing in December 2019.

Players can create an avatar known as a "Spark," which can take the form of one of several creatures from various cultures' mythology.

The game and its Discord community were abruptly closed on February 18, 2022, following the announcement and subsequent revelation in December 2021 that, unbeknownst to its playerbase, WildWorks had been developing

a NFT blockchain-based game called Cinder, which reuses its assets.