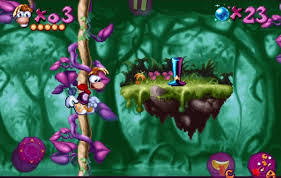 The protagonist's head also floats...
Houston: I just thought of something... how do these platforms float?
*CRASH*
Samus: NEVER question the physics in a video game!
— Maru Mari

Ah, the floating platform. A staple of platformers and many other games beside. Their popularity is usually attributed to their use in the Mario series.

What do floating platforms do? They float. In the air. Unattached to anything (other than perhaps the background wall, if indoors). Inexplicably. Usually motionless, sometimes moving in a circular or back-and-forth pattern. Their sole purpose of existence is to allow you, the player, to jump onto them to get to where you are going. After all, you can't fly.

If it just so happens that you can fly, floating platforms will serve the opposite purpose and become inane obstacles in your way, forcing you to go around them. Unless, of course, you can only fly short distances, in which case, they allow you a rest to recharge your flight meter or whatever the game happens to use.

Floating platforms aren't just immune to gravity, but to all laws of physics. Regardless of what happens to them, they'll either just stay frozen in place as if in some state of dimensional stasis (albeit with Midair Bobbing in some cases), or keep moving in a pre-defined pattern, ignoring all thrusts of inertia which attempt to affect them — unless it's a Temporary Platform, in which case the weight of the player will suddenly shock it back to reality in a couple of seconds and cause it to fall, crumble, or vanish. And woe is the player who lands (or, more accurately, doesn't land) on a Fake Platform.

Inexplicable floating platforms are in some respects a Discredited Trope, as any game developer who wishes to preserve immersion will surely opt for ways to make platforms of this nature seem more realistic, such as by attaching them to the surrounding terrain or giving some sort of justification like jet thrusters, Green Rocks, Solid Clouds, Cranium Ride on a creature that flies, or some other excuse. But if not, then this is justified perfectly well by Artistic License – Physics and Rule of Fun.

See also Floating Continent and World in the Sky when major landmasses behave this way.