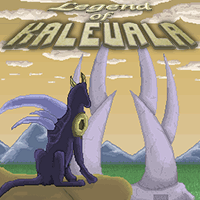 Legend of Kalevala takes place on the mysterious world of Kalevala. You, an alien quadruped, awaken in a lush forest with no memory of how you arrived or of your past. As you get a bearing on your surroundings, you see a damaged spacecraft dive through the air and crash on the other side of a mountain. Seeing this as your means of remembering your past, you set off in search of the downed ship. Unfortunately, the place you awoke in is not exactly friendly to visitors, and it appears that your body has a past all its own...

Use your Bizarre Alien Biology as you navigate the treacherous and dangerous world of Kalevala. Obtain new skills and abilities to explore more of the land. Regain your memories to piece together more of the story and yourself. Discover the many secrets behind this strange new world while exploring the vast region and fighting to survive against the hordes of hostiles. One thing's for certain, this place hides a dark secret...

Not to be confused with Kalevala, the Finnish national epic.

Can be played at here

. Be wary that saving doesn't function as of now.