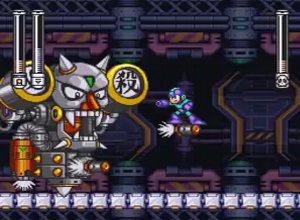 The only dangerous part of a missile is its pointy end.
Advertisement:

Games in general often have unrealistic physics when it comes to projectiles, but the more simplistic platformers sometimes take this to the extreme. Specifically, they'll let you jump on and ride atop one in mid-flight, without altering its perfectly-straight trajectory. Usually, if you screw up the jump TO the platform-projectile, the 'pointy' end will injure you. That is, of course, a problem for a One-Hit-Point Wonder.

A variant exists where you can't jump on the projectile mid-flight, but can use it after it's planted in a wall.

Often overlaps with the Cranium Ride. Most of these examples will also fall under Painfully Slow Projectile.