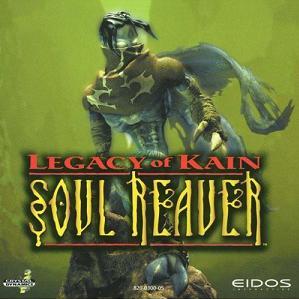 "The descent had destroyed me — and yet, I lived".
"Kain is deified. The clans tell tales of him, but few know the truth — he was mortal once, as were we all..."
— Raziel
Advertisement:

The second game in the Legacy of Kain series, developed by Crystal Dynamics and published by Eidos Interactive, and released for the PlayStation in August 1999, and the Sega Dreamcast a year later.

Starting 1500 years after the events of Blood Omen, Soul Reaver chronicles the journey of the vampire-turned-wraith Raziel, lieutenant to the vampire lord Kain, who has ruled uncontested over the ruined realm of Nosgoth ever since he refused to sacrifice himself to the Pillars of Nosgoth to restore balance to the land. Kain has spent his time raising up the vampire race, creating his lieutenants, including Raziel who is the eldest, to function as the heads of their own clans, giving them each a region of Nosgoth to rule over. The vampires have since grown into the land's dominant species, enslaving the remaining human population who have been effectively domesticated as a living supply of blood for their vampire overlords, and almost everyone has forgotten that Kain himself was once a mortal. One of the very few who hasn't is Raziel.

After evolving wings, Raziel decides to show them off to Kain, but out of an apparent act of jealously, Kain tears the bones from his wings and executes him by ordering his brothers to throw him into the Lake of the Dead; the swirling, powerful energies slowly burn Raziel as it pulls him apart, subjecting him to constant horrible pain but also leaving him unable to truly die. Five centuries of constant torture later, however, Raziel is rescued from his predicament, when he is resurrected as a wraith by the mysterious Elder God to become his "Soul Reaver". The Elder God explains that the Wheel of Fate, the cycle of reincarnation that governs the world, is dependent on mortal souls to move forward. However; because vampires are immortal, their souls do not spin with the Wheel, with horrible consequences for the land, which decay as the Wheel stalls. As such the god tasks Raziel to kill Kain and his lieutenants, telling him that doing so will restore the proper balance to Nosgoth that Kain denied it so long ago. Raziel embraces this mission, as he has plenty of good reasons to want to exact revenge on Kain and the rest of his empire.

Unlike its predecessor, which played out from an isometric view, Soul Reaver is instead a third-person action-adventure game akin to The Legend of Zelda: Ocarina of Time. Much of the game is centred around Dual-World Gameplay, as Raziel, being a wraith, and therefore not being truly dead or truly alive, can shift between the material and spectral planes of existence to progress through areas.

The game is also infamous for having something between a quarter and a third of its content removed a few months before release due to a Troubled Production that involved a legal feud between Blood Omen: Legacy of Kain's developer Silicon Knights and Crystal Dynamics, and an deadline that was too tight to fix all the bugs. For over 20 years, a group of dedicated fans dug up info about that lost content, gathered in the website The Lost Worlds.

In late 2019, the group managed to unearth the alpha builds of the gamenote very early builds that are roughly playable but haven't gone through playtesting yet, and in this case were made before the content was removed and in May 2020 streamed complete gameplay footage of the deleted areas (or as complete as was possible from unfinished builds), allowing all the fans to witness content that only the developers and a select few journalists had seen until now.

In the world of Legacy of Kain, vampires evolve over time. As fledglings they resemble your traditional pale skinned human but eventually they gain talons and hooves to replace their hands and feet, and those who live a millennium, like the titular character, Kain, can become draconic in appearance with scaly green skin, but other types of mutations can also occur.

In the world of Legacy of Kain, vampires evolve over time. As fledglings they resemble your traditional pale skinned human but eventually they gain talons and hooves to replace their hands and feet, and those who live a millennium, like the titular character, Kain, can become draconic in appearance with scaly green skin, but other types of mutations can also occur.