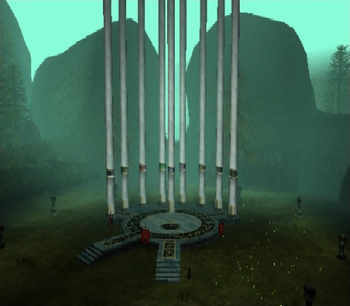 "The Pillars of Nosgoth. Even in life, few sights have moved me such as this. I marveled that such beauty should grace our dying world."The Types of Pillars From Left to Right: Mind, Dimension, Conflict, Nature, Balance, Energy, Time, States, and Death.
Advertisement:

Fictional worlds can come in many shapes and sizes. Some are Flat Worlds, some are Hollow Worlds, and others can be of truly bizarre types.

And then you get worlds which turn out to be supported by artificial megastructures.

A type of Worldbuilding trope most commonly found in fantasy and science fiction works, World Pillars give off the impression to the characters (and by extension, the viewer) that their world isn't as natural as it may seem. In fact, the mere concept of a world being held aloft by giant structures may sound crazy to the local populace who're unaware they exist. Perhaps they were put there by Precursors or beings of divine origin, either to create a place where life can thrive, or to save their original world from total destruction. Either way, they're the literal foundation of the world itself.

Expect the plot to be centered on the eventual collapse of these pillars, either by natural decay or through deliberate sabotage by the Big Bad. When a World Pillar goes, it will often take out an entire city, region or continent with it. Naturally, this leads to the heroes trying to save their world by restoring and fixing the pillars back into their original states, which may prove more challenging if the pillars are a form of Lost Technology that was not passed on to newer generations.

World Pillars can overlap with just about any setting type, just as long as it's evident that the setting itself is being supported by them.

See also World Tree, which is the natural and symbolic variant of this trope. Not to be confused with Cosmic Keystone.