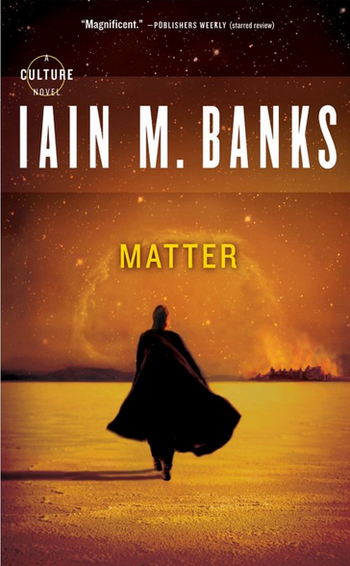 Matter is a 2008 novel of The Culture, focusing on the various political goings-on on the Shellworld of Sursamen. The main protagonists are all siblings in the royal family of the Sarl on the Eighth level: Djan (now a Special Circumstances agent for the Culture), Ferbin and Oramen. The story begins in the midst of a war on Sursamen between the Sarl and the Deldeyn. The king of the Sarl, Hausk, is killed by his Evil Chancellor Mertis tyl Loesp while Ferbin watches. Ferbin realises he has to flee and seek help from higher civilisations (termed Optimae by the Sarl) when he is pronounced dead, but he is pursued by tyl Loesp's knights while his younger brother Oramen has to deal with the pressure of being the only thing between tyl Loesp and the throne.