"Once again, the hands of the clock have begun to move..." 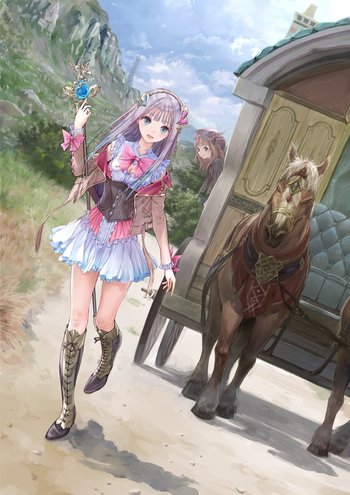 Atelier Lulua: The Scion of Arland is the fourth game in the Arland sub-series of the Atelier franchise, marking a return to this universe for the first time since 2011. The game was released on March 20, 2019 in Japan, May 21, 2019 in North America, and May 23 in Europe.
Advertisement:

The game is set after the events of Atelier Meruru: The Apprentice of Arland, in a frontier town called Arklys in the recently-expanded Arland Republic. The heroine this time is Elmerulia "Lulua" Frixell, daughter of Rorona. Though she studies hard to surpass her mother, she is not particularly talented at the art. Lulua finds a strange book which she dubs "Alchemyriddle", which only she can read, and which mysteriously reveals a hint whenever she needs to use alchemy to solve a problem. One day, Lulua receives a letter informing her that her mother's Atelier is about to be shut down due to its license expiring. In order to save the workshop, Lulua heads towards Arland, which begins a great adventure during which she will learn much about the world and herself.